WHAT SYSTEMS DO YOU NEED IN YOUR CHILDCARE?

Staff That Resist Change And Systems 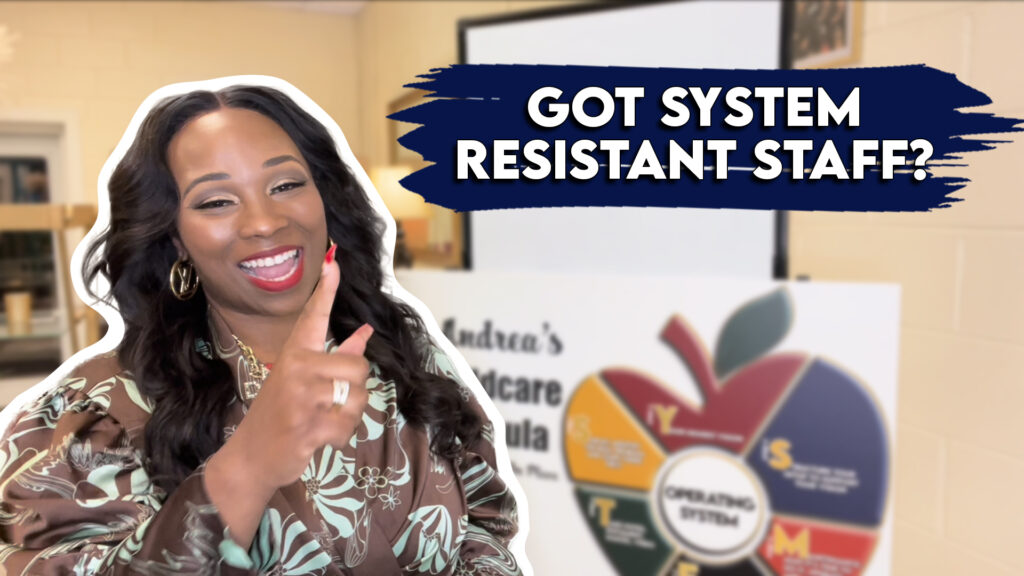 For today’s proven management solution, I want to talk to childcare business owners who are experiencing staff that is resisting following their childcare systems.

So if you want to find out how to work with system-resistant staff, continue reading this blog.

I’m excited that we have extended the date for you to attend our all-new Jumpstart My Childcare Success Conference.

You can go now and find out how you are going to grow your business expeditiously attract the right staff go to the next level and figure out the systems to help you scale.

Grab your tickets today by clicking this link.

Today I want to talk to you about my childcare success formula to put systems in place. Sometimes we skip this process but this is how I want for you to move forward with creating systems that your staff will follow so that they’re not as resistant.

Now we all know that we do have some bad apples that destroy it for the whole but this does not mean that you are to apply this scenario where every staff. Some team members are just playing, “Oh, not with the program”. If they’re not with it and not willing to learn, and being passive-aggressive by not doing the job and then looking for you to find somebody else to do it, just let them go. Tell them your coach says so.

Whenever you’re dealing with staff members that are at a place where they’re resisting change because you’ve been doing it so long, and now you figured out how you are ready to scale your business to the next level.

The first thing I want you to do is conduct a survey.

So you bring individually your team to your office and say, “Hey, you know, I noticed that there’s an easier way for us to accomplish this.”  You have to identify the way they are doing it now versus the easiest way that they can be done, and ask them for their input on it.

I have a whole map that you will receive when you come to the conference that will teach you how to survey and identify the real problem because you have to identify what the real problem is that is causing a staff member to be resistant to your system.

You know, sometimes we have team members that are operating and what was in that operating and where we are right now. You’ve grown with multiple locations. You’ve grown by having a coach learning about systems like you are maturing in so many areas, but your team does not know the highest vision that you’ve discovered that you want for your childcare business.

So step two is to give them your highest vision and communicate that because you’re saying systems are to operate on where you are going, not where you are.

So this is where most team members start the resistant process because now you’re changing their structure. So I want for you to begin to start with your team training process first rather than your hiring process, onboarding process, or even if it is your orientation process. All three of those areas are what we call your three checkpoints. Make sure that you train your team on those three checkpoints on your highest version of your vision.

The reason why I’m asking you to talk to your team in such a way with images, documents, videos, and notes is because what’s written is what matters, and what’s visible is what matters.

You’re giving them an opportunity to see themselves and see the areas that need to be changed.

So in this phase of doing your layout, this is where you’re working with your team, helping them to see that what you’re doing is to help them improve, have more things done in less time, and enjoy their jobs more.

And so when you’re in this phase, it’s all about the team members seeing what’s in it for them, giving them the joy of saving themselves time, energy, and resources.

And during this phase, what I want you to do is organize the layout first.

So for example, when I started putting systems in place in my business, I created my training program first, laid out for the full year, what would be the points that we would discuss during a particular month.

So I had January, February, March, April, May, June, July, August, September, October, November, and December, my whole year, planned out so that I could have my checkpoints and the layout that my team will follow.

And every ten weeks I train my team on new systems concerning the classroom especially. And then every week, I train my admin team on admin work and systems.

Now it’s time for you to do it, operate, and automate your SOPs. So when it comes to maintenance, you’re in the phase now where you’ve got the heart of your team members in one accord with you, everyone should know the vision at its highest point.

So your highest point could be where you will be in the next three years or five years- your biggest dream that you have for your organization.

Now that your team is in one accord with you there is time to maintain the system. So this is when your checkpoints, your management team, your meetings with your team members are centered around improving the operations of those systems and processes that you are expecting from your team that you’ve taught, discussed, given images, SOPs, etc.

Now that you have all of that in place, it’s about expecting it, and you have to inspect what you expect from your team. So that’s it for today guys, this is my formula.

We’ll be discussing all this at our 2023 childcare conference, Jumpstart My Childcare Success.

Go get your tickets right now to be a part of it.

When you go to the website, you can also book a clarity call with my team to discover how these systems can be used in your program so that you can know that you’re attending the right conference. 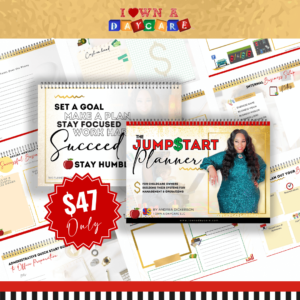 Your Business Vision + My Systems
= Childcare Success
Get it for less than the price of
your monthly Netflix.

GET THE PLANNER NOW 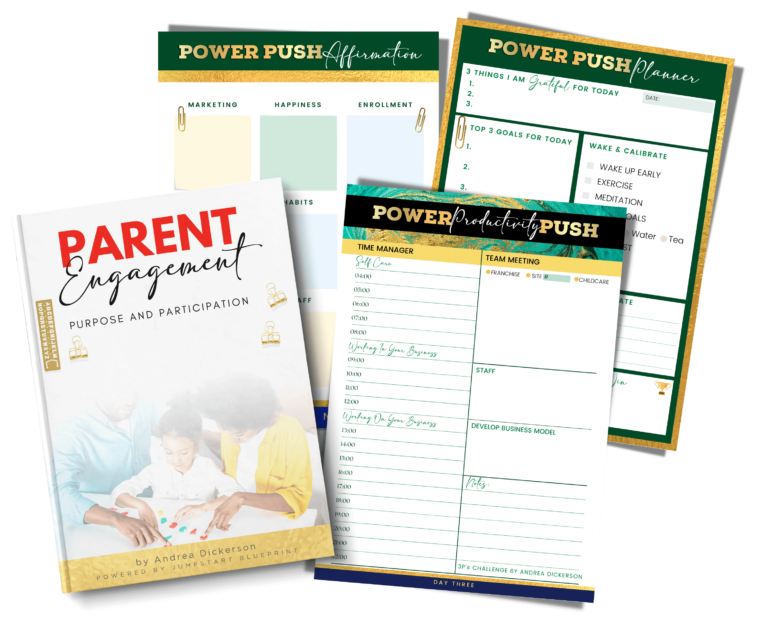 Gain immediate access to our different resources in different mediums.

Give me access to the free lessons
Menu
WORK WITH ANDREA